FOR IMMEDIATE RELEASE…Vancouver, British Columbia: World Copper Ltd. (“World Copper” or the “Company“; TSXV: WCU, OTCQX: WCUFF, FRA:7LY0) announces that it has completed an internal technical review of the exploration and development potential of the Zonia Copper Oxide Project (“Zonia” or the “Zonia Project“), located in the Walnut Grove Mining District, Yavapai County, Arizona, United States.  The Company acquired Zonia in January 2022; a decision made in part based on Zonia’s strong 2018 preliminary economic assessment (the “PEA“).

Nolan Peterson, CEO and President of World Copper Ltd commented “With the Zonia Project in Arizona and our flagship Escalones project in Central Chile, World Copper now controls two significantly de-risked copper oxide resources that set us apart from most junior copper exploration companies.  The Zonia Project in particular has established itself as a near-term project with a strong development case and timelines that synergize well with our overall strategy.  Since acquiring Zonia our team has focused in on understanding its potential to build upon its already robust economics.  We will be restarting exploration and development at Zonia in the coming months, and I look forward to providing updates as our work progresses.”

World Copper has assessed Zonia’s potential to host significantly more copper mineralization and is currently working on exploration drilling targets along the southwest to northeast long-axis of the Zonia deposit and below the existing resource (Figure 1) as well as a compelling surface rock sample copper and molybdenum geochemical anomaly coincident with a manganese low anomaly located approximately two kilometres north-northeast of the established resource (Zonia Norte, Figure 2).  In addition to the exploration targets identified, World Copper intends to update the  PEA, which is dated April 17, 2018, with an effective date of March 22, 2018, and was prepared by Global Resource Engineering Ltd. for Cardero Resource Corp., which reported mining methods and an economic base case based on USD $3.00/lb copper (a copy of the  technical report with respect to the PEA is available on the Cardero Resource Corp. SEDAR profile at www.sedar.com).  The mineral resource statement used for the PEA will also be updated as part of this process, to reflect recent copper prices.

World Copper has compiled and evaluated historical surface and subsurface geological, geochemical, and geophysical data currently available for the main Zonia deposit.  Previous explorers focused on the near-term production potential of the Zonia deposit and constrained the mine plan model to a scale that would allow all mine infrastructure to be on private patented land claims, where the mine permit process is comparatively shorter.  Historical surface exploration data and subsurface drilling data support significant potential to expand the existing resource through infill and step out drilling within and adjacent to the current resource.

The Zonia deposit is outlined by an IP chargeability high and has an associated surface copper-molybdenum rock geochemical high with a coincident manganese low (Figures 1 and 2).  This anomalism extends beyond the current drill footprint and warrants step out drilling on all sides.  Furthermore, additional drilling is necessary at depth below the current pit to (i) infill widely spaced mineralized intercepts and (ii) identify additional mineralization capable of pulling the pit to greater depths.

A review of the geology and existing block model will be made to evaluate areas of additional mineralization internal to the existing model and to identify specific targets for expanding resources with follow-up drilling. 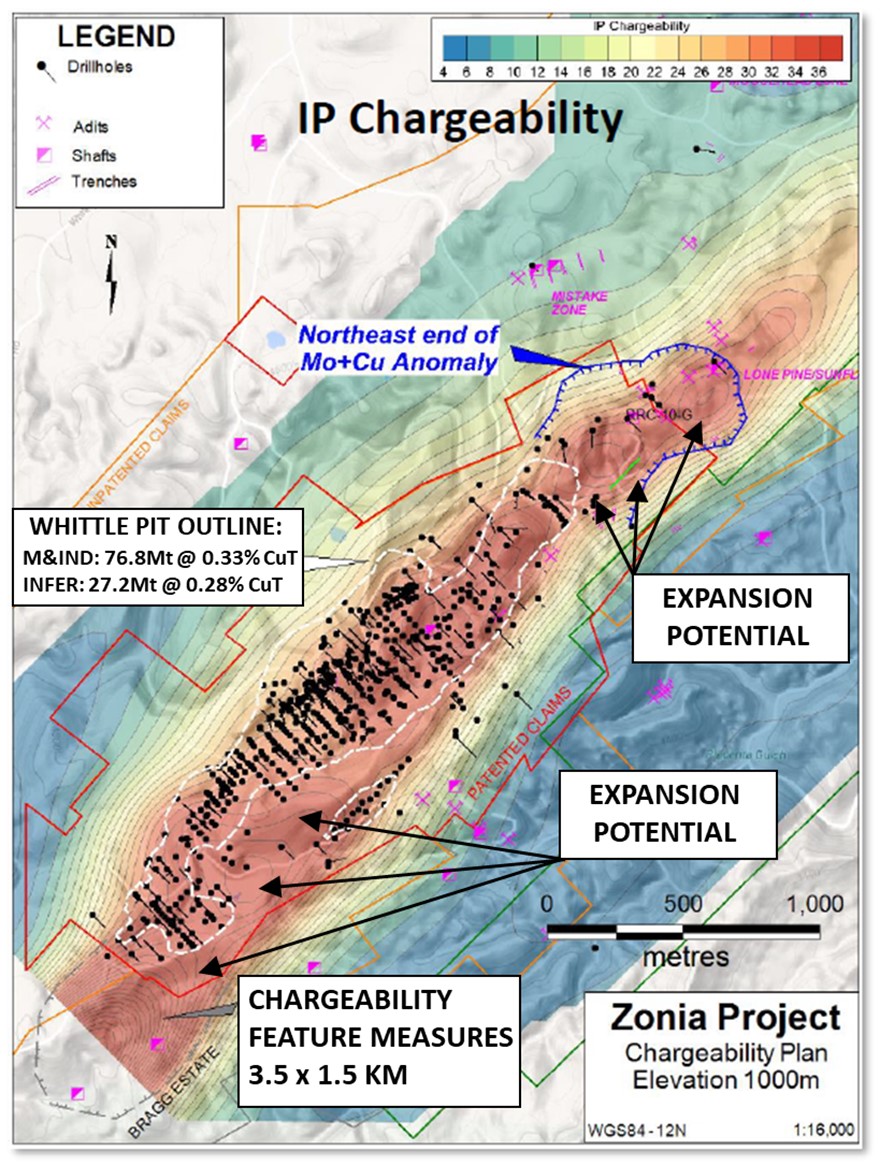 Figure 1.  Expansion potential based on the current drill hole distribution, the PEA Whittle Pit outline and an IP Chargeability geophysical feature, which is interpreted to represent mineralization extending out from the current oxide copper resource (Cardero Resource Corp., 2021).

The largest potential for a new discovery at Zonia is to the north-northeast of the current open pit and resource, where a large (2.5 x 1.5 kilometres) coincident copper-molybdenum-manganese geochemical anomaly has been identified (Zonia Norte; Figure 2).  Historical surface rock geochemical sampling has delineated a copper-molybdenum anomaly that is spatially coincident and similar in size/shape with a broad zone of manganese depletion consistent with typical porphyry-copper mineralization.  This anomaly is situated 1.5 kilometres to the north-northeast of the Zonia deposit, which exhibits the same pattern of geochemical anomalism and is comparable in size to the northeast target.  It is significant that the anomaly is open to the north where outcrops are covered by post-mineral cover.  This large geochemical footprint is interpreted to represent a second porphyry centre.  Nearby historical drill holes indicate the area is deeply weathered and copper-oxide mineralization is present.

Exploration efforts are ongoing at Zonia.  Additional mapping and detailed sampling is required to understand controls on mineralization at the northeast end of the Zonia open pit, where several high-grade historical copper showings need to be fully understood.  The showings lie on a trend that links the main deposit to the new drill target to the northeast.  The Zonia Norte porphyry target was fully permitted by the previous operator and is drill-ready once the permitting process is re-started.  The drill programme comprises 18 shallow near-surface oxide targeting holes totaling over 5,000m (18,000 feet).  Further mapping over the target and adjacent areas are planned.  High-grade historical copper occurrences (Copper Crown and others) along the north and east edges of the Zonia Norte anomaly will be mapped and sampled as part of the ongoing target delineation exploration program at Zonia.  These occurrences of high-grade copper have geological similarities to volcanogenic massive sulphide and/or replacement-type deposits.

Figure 2.  Zonia gridded rock geochemical anomalies. The large anomaly at the north-east end of the claims, Zonia Norte, is interpreted to be another copper oxide porphyry (Cardero Resource Corp., 2021).

World Copper plans to update the PEA in order to: (i) have it reflect current market conditions; (ii) include the full extent of the available resource; (iii) explore different sizes and concepts as part of a strategic review of the asset; and (iv) incorporate additional drill and geological data, as warranted.  The PEA used USD $3.00/lb copper for a base case scenario producing 92.6 million tons of leachable material over an 8.6-year mine life.  At a copper price of $3.00/lb, the Zonia Project shows an after-tax NPV@6% of $225 million, an NPV@8% of $192 million, an NPV@10% of $163 million, and an IRR of 29.0%; the payback period is 2.89 years.  The PEA concluded the Zonia Project is most sensitive to copper price which is an important consideration for improving the economics.  The updated PEA will be part of a broad strategic review of the Zonia Project and is a low-cost and high-reward study that is expected to positively impact Zonia’s development outlook.

John Drobe, P.Geo., a qualified person as defined by NI 43-101, has reviewed the scientific and technical information that forms the basis for this news release and has approved the disclosure herein.  Mr. Drobe is not independent of the Company as he is the Chief Geologist of the Company.

World Copper Ltd., headquartered in Vancouver, BC, is a Canadian resource company focused on the exploration and development of its copper porphyry projects:  Escalones and Cristal in Chile, and Zonia in Arizona.  Two of these projects have estimated resources with significant soluble copper mineralization, and each has additional copper porphyry targets with exciting potential to expand the resource base.

The World Copper team has a unique skill in navigating the mining sector within Chile, with some members having worked in the country for more than 40 years and with discovery success.

On Behalf of the Board of Directors of

This news release contains forward-looking statements and forward-looking information (collectively, “forward-looking statements”) within the meaning of applicable Canadian and U.S. securities legislation.  All statements, other than statements of historical fact, included herein including, without limitation, the expected completion of an update to the PEA, the completion of the planned exploration program, future exploration of the Zonia Project, anticipated exploration program results from exploration activities, the discovery and delineation of mineral deposits/resources/reserves and the anticipated business plans and timing of future activities of the Company are forward-looking statements.  Although the Company believes that such statements are reasonable, it can give no assurance that such expectations will prove to be correct.  Forward-looking statements are typically identified by words such as: “believes”, “expects”, “anticipates”, “intends”, “estimates”, “plans”, “may”, “should”, “would”, “will”, “potential”, “scheduled” or variations of such words and phrases and similar expressions, which, by their nature, refer to future events or results that may, could, would, might or will occur or be taken or achieved.  In making the forward-looking statements in this news release, the Company has applied several material assumptions, including without limitation, that market fundamentals will result in sustained copper demand and prices, the receipt of any necessary permits, licenses and regulatory approvals in connection with the future development of the Company’s projects in a timely manner, including the Zonia Project, the availability of financing on suitable terms for the development, construction and continued operation of the Company’s projects and its ability to comply with environmental, health and safety laws.

Forward-looking statements involve known and unknown risks, uncertainties and other factors which may cause the actual results, performance or achievements of the Company to differ materially from any future results, performance or achievements expressed or implied by the forward-looking information.  Such risks and other factors include, among others, requirements for additional capital, operating and technical difficulties in connection with mineral exploration and development activities, actual results of exploration activities, including on the Zonia Project, the estimation or realization of mineral reserves and mineral resources, the timing and amount of estimated future production, the costs of production, capital expenditures, the costs and timing of the development of new deposits, requirements for additional capital, future prices of copper, changes in general economic conditions, changes in the financial markets and in the demand and market price for commodities, lack of investor interest in future financings, accidents, labour disputes and other risks of the mining industry, delays in obtaining governmental approvals (including of the TSX Venture Exchange), permits or financing or in the completion of development or construction activities, risks relating to epidemics or pandemics such as COVID–19, including the impact of COVID–19 on the Company’s business, financial condition and results of operations, changes in laws, regulations and policies affecting mining operations, title disputes, the inability of the Company to obtain any necessary permits, consents, approvals or authorizations, the timing and possible outcome of any pending litigation, environmental issues and liabilities, and risks related to joint venture operations, and other risks and uncertainties disclosed in the company’s continuous disclosure documents.  All of the Company’s Canadian public disclosure filings may be accessed via www.sedar.com and readers are urged to review these materials.

World Copper prepares its disclosure in accordance with the requirements of securities laws in effect in Canada, which differ from the requirements of U.S. securities laws.  Terms relating to mineral resources in this news release are defined in accordance with NI 43-101 under the guidelines set out in CIM Definition Standards on Mineral Resources and Mineral Reserves, adopted by the Canadian Institute of Mining, Metallurgy and Petroleum Council on May 19, 2014, as amended (“CIM Standards”).  The U.S. Securities and Exchange Commission (the “SEC”) has adopted amendments effective February 25, 2019 (the “SEC Modernization Rules”) to its disclosure rules to modernize the mineral property disclosure requirements for issuers whose securities are registered with the SEC under the U.S. Securities Exchange Act of 1934.

In accordance with Canadian securities laws, estimates of “inferred mineral resources” cannot form the basis of feasibility or other economic studies, except in limited circumstances where permitted under NI 43‑101.